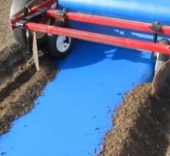 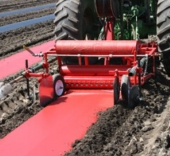 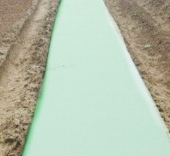 Plastic mulches offer a variety of benefits while being easy to use.

Choose the colour that suits your taste and crop's needs:

The most widely used, available, and inexpensive of the coloured mulches, black plastic mulch has excellent weed suppression ability because of its opacity.
It is also useful for warming soil during the growing season.

White
The benefits of white plastic mulch are keeping weeds at bay, retaining soil moisture, and keeping the soil cool around the roots of crops such as peas, broccoli, cabbage, and cauliflower.

Brown
The brown Infrared Transmitting (IRT) plastic mulch is a fairly recent innovation.
It warms garden soil better than black plastic and also controls weeds.
IRT is a technology that combines the weed-suppressing properties of black plastic with the heat-absorbing qualities of clear plastic.
(Clear plastic is better at warming soil than black plastic but does not control weeds as well.)

Red
Researchers at the USDA and Clemson University noted that certain crops performed better when grown in red mulch as opposed to black mulch: tomatoes, which yielded 20% more fruit; basil, the leaves of which had greater area, succulence, and fresh weight; and strawberries, which smelled better, tasted sweeter, and yielded a larger harvest.
State researchers found yield increases for tomatoes and eggplants on red mulch compared to black.
Farmers in Berkshire County saw marked increase in overall plant size, fruit size, and yield of tomatoes, eggplant, and peppers when plants were grown in red mulch as opposed to straw mulch.

Green
The green IRT mulch has been shown to encourage earlier ripening and greater yields of cantaloupes in trials at Penn State and at the University of New Hampshire, where IRT mulch was developed.

Blue
Researchers at Penn State found that cantaloupes, summer squash, and cucumbers all produced significantly more fruit when plants were grown in blue mulch as compared to black mulch.

Silver
Reflective silver mulch is useful as a deterrent to aphids (and the viral diseases they carry) and whiteflies, according to researchers at the University of California’s Kearney Agricultural Centre.
It has also been shown to reduce the number of cucumber beetles present on cucumber and squash plants in studies at Virginia Tech.
It has potential benefits for pepper crops: at Penn State, bell peppers grown on silver mulch yielded an average of 20% more fruit than peppers grown on black plastic.